For the 80th anniversary of the Yellow Cruise that linked Beyrouth to Pékin, Citroën invited a large public do celebrate one of the great human and technical adventure that marked the history of automobile. At this occasion, the public was invited to visit the CITROËN CREATIVE TOUR.

The CITROËN CREATIVE TOUR is a traveling exhibit (Paris, Berlin, Moscou) to discover the yellow cruise and also an open window on the future. It offers the public an original and fun experience revealing the emblematic Citroën models in an artistic universe.

For this exhibit, Nokinomo has worked with Dominique Playoust, exhibit commissioner of the Creative Tour, to set up 3 original creations.

With the Kuka robot, the public will experiment a mechanical, interactive and lively discovery of the Citroen Yellow Cruise. 80 years later, Kuka allows a true voyage in time by giving life to this unique artistic and human adventure and it shows the technical, scientific and industrials challenges that had to be solved at the time.

Kuka is an audiovisual interactive and narrative installation created with Nokinomo and Dominique Playoust, Commissioner of the Creative Tour Exhibit.

Digit Table is an interactive and recreational table that shows on the scenery printed on the plate some images that allow the public to explore different aspects of Citroen technology .

Each element is seen through the photographic eye of the interactive table and when it is recognized, it starts displaying audiovisual sequences. The tour allows the visitor to connect the technological, scientific, human and artistic challenges faced by Citroen 80 years ago with the ones existing today.

This technology of visual identification was developed by Moodstocks and is implemented by Nokinomo and Dominique Playoust, Commissioner of the Creative Tour Exhibit. 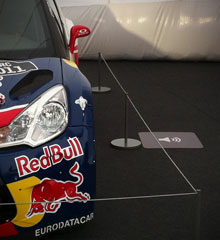 WRC Sound is an interactive sound system allowing the visitor to listen «in situ» the sounds of the motor engine of the Citroën DS3 WRC in an open, but delimited space.

The technologies implemented for this installation are based on the interaction between the visitors and the system: the presence of the visitor is recognized by a video capture of his image and this starts the sound that only he can hear. With WRC Sound and without any physical contact, the visitor is immediately submerged by the sound of the vehicle like if he was driving in a race car.